Just when you thought that the iPod mini was the smallest fully functional iPod device you could purchase along comes the iPod nano. In typical, Apple marketing style: 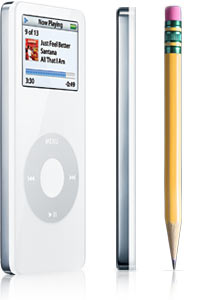 Boasting an impressive feature list, the real sell is the amazing 3.5 x 1.6 x 0.27 size. Now that’s small. In other Apple press news, the iTunes enabled Rokr cell phone made by Motorola is now available exclusively through Cingular. Madonna also announced that her entire music library is now available through the iTunes music store and so is author J.K. Rowling’s Harry Potter books. The effect that Apple’s iPod and iTunes Music Store has had on the market environment is quite scary. Recently, D&M Holdings, owners of the Rio brand, announced that they would exit the portable digital audio business. Furthermore, according to the Mercury News, the iTunes Music Store has a whooping 82 percent share of the U.S. digital music market and 80 percent of the U.K. market.

I’m quite sure that both MSN Music and Yahoo! Launch need something more than the plethora of devices that support Windows Media file formats if they’re hoping to make any kind of dent on Apple’s continuous market domination. Where’s the catalyst product when you need one?