Alas, yet another post that I started back in July but never got around to completing it. So, for those of you with fancy blog readers such as Google Reader or Newsgator or RSS Bandit, you’ll know that I actually completed this post in December. For the rest of the world here’s a small glimse of the trip to Florida in July 2006. 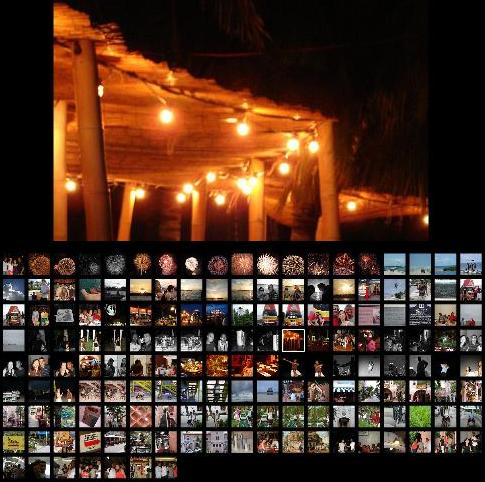 During the first week of May I visited Microsoft’s Redmond campus. The whole purpose of the trip was to attend the annual MSN Butterfly Tour – an MSN Butterfly is a volunteer who provides feedback to the various teams at Microsoft launching products through MSN or Live.com

I’ve setup TheÂ Redmond GalleryÂ using SlideShowPro to display the 50 odd pictures I took while at Microsoft’s Redmond campus. Also, thanks to Ryan this initial photo collection has expanded with his contribution of pictures.

Without further ado here’s a very brief synopsis of my first trip to Microsoft:

Departed from Philadelphia bright and early. Was bumped up to first class thanks to the Silver Elite World Perks Program on North West Airlines. YAY for first class since I was hungry and they actually serve you something other than in-flight magazines to eat. After 5 hours of flying and transit through Minneapolis I land in Seattle-Tacoma International Airport (SEAC or SEA-TAC). I had previously co-ordinated to meet up withÂ Eric and Nancy and thanks to Nancy’s friend Linda we were able to to move around Seattle a bit more easily. Redmond is about a half hour from Seattle and the entire drive to Redmond is filled with this picturesque landscape. Microsoft knows how to impress by playing the hospitable host andÂ upon arrival at the Redmond Marriott we wereÂ immediately made aware of this through small welcome presents (e.g. chocolate, stuffed toy, welcome card). I spent most of the day exploring the Redmond Town Center and finished off the day after the Mixer that Eric and Nancy put together. Sorry no pictures on the Mixer.

If anyone on the trip figured out how to get the alarm clock in the hotel to work they definitely deserve an award. Anyways, by 7:00 AM everyone is at the Microsoft campus and following brunch we’re briefed by Blake Irvine, Corporate Vice President, Windows Live Platform Group. The Microsoft campus is big. It’s like a university with tons of soda machines and geeks everywhere, and now apparently there’ll be towels and Starbucks coffee too. Everyone you talk with, hasÂ this amazing understanding of technology. They’re also hiring like crazy based on the 200 person new employee orientation we ran into. The cafeteria serves food like they’re trying to feed a starving campus. The whole day was filled with product demonstrations and feedback sessions. My goal to meet with the Custom Domains teamÂ was accomplishedÂ and provided as many feature requests that I felt they were lacking.Â We also ended up meeting people like Leah from the Windows Live Messenger Team and were given sneak peaks at the Messenger phones that have now launched. Microsoft treated us to dinner at the Columbia Winery -Â  Washington Stateâ€™s first premium winery. Anyways, after dinner at the Columbia winery I crashed.

Another day of product demonstrations, feedback, surveys and glances at what’s coming over the next few months. Finally met Sanaz from the Live Team and Moz from the Spaces team.Â We got a better idea of products like Max and the void that they’re trying to fill or visualize. The day ends with a trip to the company store to finish our vouchers and with final farewells at the visitor center.

It seems that every Microsoft employee or product team with a blog connects with their audience much better. We could finally put faces to names and tons of ‘oohs’ and ‘ahhs’ and ‘please scrap that feature type or else …’ feedback were easier to provide to people who had talked about their product. Nevertheless, everyone from the Butterfly group was hereÂ determined to make their feedback into one of Microsoft’s plethora of products. Everyone from Microsoft was there determined to make their product the best. Talk about passion from both sides. Overall, this trip had a bit of everything – a great trip, a short trip, a networking trip andÂ most of all aÂ much enjoyed trip. Infact, even if Scobleizer wasn’t there you didn’t need his presence to realize that this was one group of people you could trust would do their best to make sure that their product met your needs.

I was going to write up a nice lengthy blog about my recent trip to Seattle and Redmond but as I mentioned earlier today is one of those weekends when there are just one too many things that I’m trying to get done.

In a paragraph, Seattle is one of those cities you just have to visit. Surrounded by mountains and waterways, rich culture and history, delicious food and some unique architecture that really accents the weather. I stayed at the Hostel International for 3 days and spent time at the Pike Place Market, Waterfront, Pioneer Square and even went on an Underground Tour. After a ferry ride to Bainbridge Island, the Experience Music Project, Space Needle and even Uqjimaya located in the International District I had not even seen a quarter of the tourist attractions.

Words don’t do justice to such a great place, so as a temporary measure I’ve setup SlideShowPro to display the 140 odd pictures I took while at Microsoft’s Redmond campus and some time I spent in downtown Seattle. Also, thanks to Ryan the initial photo collection has expanded with his contribution of pictures. Thanks Ryan.

Without further ado The Seattle Gallery

Delta has just relaunched their website. This is weird timing since my marketing class recently covered a case study on how to market Delta in light of the various bankruptcy issues the airline has faced. One of the issues we discussed was how the airline could use their website to retain the brand value of Delta while still placing an increased emphasis on convenience of travel reservations, marketing of travel destinations and the SkyMiles customer loyalty programs. I think the new site has adequately addressed these issues. Will things be different in the next quarter?